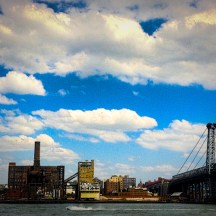 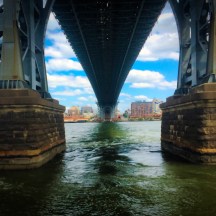 The Brooklyn Bridge … a beautiful piece of architecture. 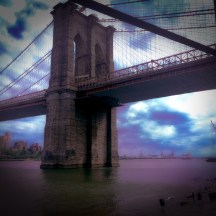 Usually, we wouldn’t go into this much detail about South Seaport, but Feeder feels it’s a community that deserves more attention and appreciation… so just take a second to understand why we love South Seaport and support its ongoing battle to restore and preserve itself.  (or just skip below for the Feederie Happy Hour details!)

South Seaport is home to the Original Fulton Fish Market and it is one of the only neighborhoods left from the booming late 18th- and early 19th-century New York. When New York City was gaining its momentum and becoming the “Empire State”, South Seaport was the district that helped form New York’s entire being. South Seaport features both the heritage of New York’s once porting days and maintains the grand cobblestone streets of Schermerhorn Row, an avenue of houses that are more than two centuries old (and they were built on a landfill).

In the late ‘60s, Seaport Museum was designated as the protector of South Seaport by the state of New York. The Seaport Museum tried to preserve multitudes of buildings through beneficiaries, but do to struggles, lost the deal. In the early ‘80’s, the museum regained control from City Hall and accepted the greatest challenge of all – creating a New Fulton Market and Pier 17. In the late ‘80’s South Seaport was NYC’s No. 1 tourist destination.
After the horrible tragic events of 9/11 and then the devastating effects of Hurricane Sandy, the tourism (and even New Yorkers visiting this area) has died down. FiDi and South Seaport can seem eerie and like a ghost town sometimes. But with that eeriness, it’s an eeriness of pride (at least to us). We are proud that New York City once thrived down town and was the busiest port in the world and we take pride in maintaining and sharing the heritage. On another sense, we are proud of how Americans in general have bounced back from horrible tragedies and inevitably show the world that nothing can stop us from loving our heritage and taking pride in where we come from.

So – let’s get up to speed, currently South Seaport is still a mess. Pier 17 is being reconstructed and is supposed to be finished by 2015. However, they are not going to be able to maintain as many of the historic ships that were once available for everyone to enjoy. We hope to see the city and others step in and fight for Seaport!

For now though, there are new things popping up all over Seaport that brilliantly spells out SUMMER and FUN. Recently Feeder stumbled down the East River and found ourselves in a fun outdoor drinking spot in South Seaport. Read below for all of the details! 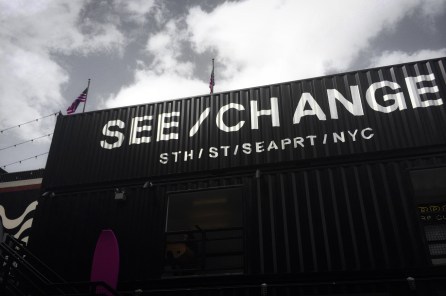 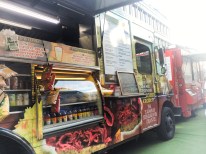 There are at least 10 options for food at the Feed Trucks Station!

As we walked through to South Seaport (Fulton St. between Water St. & Front St.), we came across some open area with green fake grass and chairs laid out. There was an outdoor bar, a movie screen, a whole pop building offering a rooftop bar and shops, and an area with food trucks and seating! How amazing and what a treat to find this in the Summer… they must have known we were ready for a beer.
Howard Hughes company and Ambrose Hall have worked together to create this amazing South Seaport summer popup.
Here’s our best recommendation:

It was amazing! Quiet, not overly crowded, reasonably priced, in the sun! This is perfect if you want something low-key and chill.
There’s also a “pop up” trailer type of thing behind the movie theater… not sure how else to explain it. But it is 2 stories and the bottom offers shops, such as vegan juices, organic clothes, etc. and the top… well the top is a ROOFTOP BAR, which is currently Beekman Beer Garden. The original Beekman Beer Garden is closed this summer due to the construction on Pier 17.

*If you are looking for a good time and want to do some serious drinking, OPT for the rooftop bar instead of the outside Ambrose Hall bar. There were people beer bonging when I was there, seemed like a pretty good time.* 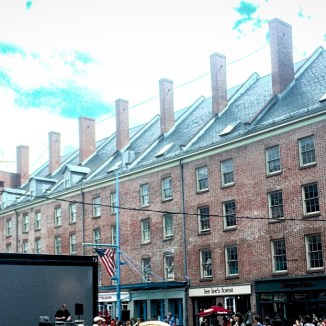 View of the Cinema and Buildings 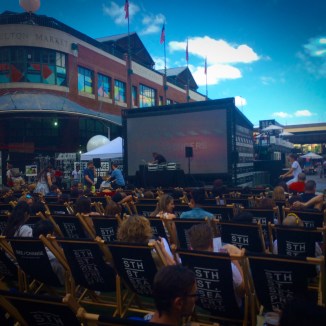 View of the movie theater area and seating.

Yes, there is a bar and there is an outside movie theater. Perfect. Now, the seating is minimal, so this place probably fills up fast. But See / Change is offering a movie every Wednesday and Saturday night at sunset (8pm). They have some good options too! The schedule is posted below.

This seems like a great date night idea or something chill to do during the week or on Saturday! If you’re going to go for the movie, go early!

Feeder loves South Seaport and this new SEE / CHANGE pop up. We encourage you to go!

Feed Me by Food Mood